Episode 13: The Evolution of Witchcraft with Janet Farrar and Gavin Bone 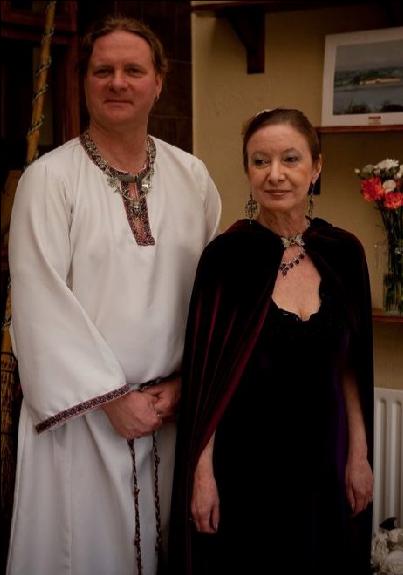 We’re recording from Sunfest! Courtney and Kanani interview special guests Janet Farrar and Gavin bone, who discuss the history of working with the words Witch versus Pagan, the evolution of modern Witchcraft through the 80s and 90s. Janet and Gavin share stories about famous Witches Doreen Valiente, Alex Sanders, and Gerald Gardner. Also discussed: the problem with “Sacred Bookism,” putting your leaders on pedestals, and reading rituals off pieces of paper. Janet and Gavin also offer their advice for new Witches and suggestions on evading Witchcraft dogma. Plus, a walk down Kanani’s memory Witch-lane, the problem with time travel, and a bunch of bad Monty Python jokes.

Janet Farrar and Gavin Bone are practicing Wiccans (modern witches) and authors who publish books on the subjects of Paganism, Magick and Witchcraft. Prior to the death of Janet’s first husband (Stewart Farrar), Janet and Stewart were recognized as experts on Witchcraft and the Occult, perhaps best known for co-authoring A Witch’s Bible. Gavin joined them in 1993, and has since worked with them on The Pagan Path, The Healing Craft, The Complete Dictionary of European God and Goddesses, and the The Inner Mysteries. Their current work is in the areas of Spiritism and Trance Prophesy, regularly conducting practical workshops in these fields for the Pagan community. Janet is also a professional Tarot Reader and counsellor who has trained in Jungian psychology, and Caballistic training. Gavin is an Empathic Healing Medium, training in spiritual healing in the 1980’s and initiated into three different traditions of Wicca, including Seax-Wica and Alexandrian.   Gavin was also part of the Traditional British Shamanism revival in the UK during the 1980’s. He also works as a Tour Guide taking groups around the ancient sites of Ireland. Janet is registered in Ireland to do legal handfastings (pagan marriages) in the Republic of Ireland by the Pagan Federation Ireland the General Registry Office. Both Janet and Gavin believe that witchcraft is a traditional of healing and self-discovery, as well as an occult practice. It is not dogmatic by nature, but evolves according to culture and circumstance. It is a spirituality, focusing around some of the most ancient of magical practices of mankind.